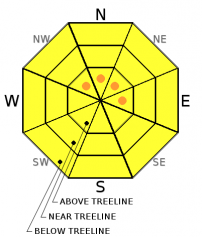 In the Cabinet Mountains near Lunch peak we found 9 feet of snow with calm winds and below freezing temperatures.  Above the thick icecrust formed 3 weeks ago, we have received 3 feet of low density fluff with the top 3 inches starting to slab up from the recent winds since Wednesday.

In the Cabinet Mountains near Lunch peak we found 9 feet of snow with calm winds and below freezing temperatures.  Above the thick icecrust formed 3 weeks ago, we have received 3 feet of low density fluff with the top 3 inches starting to slab up from the recent winds since Wednesday.

Isolated areas of considerable exist in steep exposed terrain in the upper elevations of our higher peaks.  Stay clear from all cornices that have been building with recent winds.

With up to 2 feet in the forecast and temperatures at or near 32, the snow may be on the heavy side depending on how things shake out where you are at.  This new snow will be sitting atop some low density storm snow from earlier in the week and will need some time to compress and consolidate.  Watch for rapid changes and give this new snow some time to bond.  Typically 24 to 48 hours.

At our lower elevations, temperatures will be well above freezing.  Watch for loose sluffs up to the 4500 foot range.

Yesterday in the Cabinets, we saw some warming at the 4500' elevation later in the day where things were getting a bit sticky and observed some pinwheeling. Up to 6200' the snow quality remained excellent with some wind.  We saw some recent avalanche activity from last week on an open steep exposed NE aspect near Blacktail lake.  The Selkirks seem to have had the most wind with slabs up to 5 feet in the upper elevation ridgetops where exposed.  Reports from the public include some touchy windslabs last week in upper elevation steep exposed slopes, one above Fault Lake and up near Clifty Mountain.  This week these expect to see considerable hazard areas on steep, exposed ridgetop areas.  On a North aspect we observed about 3 feet of new snow on top of our 3 week old ice crust that is still consolidating between each of our recent storms this past week.

Southerly aspects are all much firmer across the advisory area due to sun and wind.

Attention! I just talked with Ben Bernall, forecaster out of the Kootenai and yesterdays observations in the Purcells near Northwest peaks however are different than the rest of our advisory area at this time.  The word is that the 3 feet of snow is not bonding well to the icecrust and that there is a nasty surface hoar layer a few feet down that is more prominent than what we are seeing across the rest of the advisory area.  For more information visit http://www.flatheadavalanche.org/kootenai-snowpack-summary

Warmer temperatures possibly 36F today with cooling through the weekend with highs at 29 on Sunday.  Expect to see new snow accumulations up to 5 inches during each day and night through the weekend, picking up 1-2 feet of snow throughout the weekend in the mountains with temperatures hovering around 32 day and low 20's in the night.  In the northern panhandle winds will be out of the southwest in the 20's with gusts getting into the 30's through the outlook period, whereas the southern portion will see lighter winds around the low teens with gusts in the low 20's.  Continued snow storms throughout all next week.