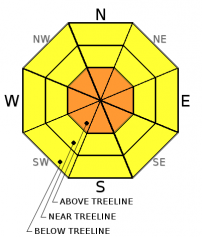 The storm that was called off ended up materializing with 6 -8" of heavy, dense snow and gusty SW winds. Watch for windslabs and storm slabs at the high elevations, and windslab development to continue throughout the day. Expect to see loose-wet avalanche activity in the lower elevations today and on the southern aspects as the sun hits them tomorrow.

The storm that was called off ended up materializing with 6 -8" of heavy, dense snow and gusty SW winds. Watch for windslabs and storm slabs at the high elevations, and windslab development to continue throughout the day. Expect to see loose-wet avalanche activity in the lower elevations today and on the southern aspects as the sun hits them tomorrow.

At the higher elevations we recieved 6-8" of new snow with SWE in the 1.5" range.  This is dense storm snow that will add stress to the pack.  The sunny aspects had formed a sun crust that can act as a slippery bed surface for these storm slabs. As you are travelling in the backcountry, evaluate the storm totals in the areas you are playing in and test small slopes for bonding and stability before committing to more consequential terrain.

Previous windslabs had stabilized nicely just in time for the new ones that formed late yesterday and through the night.  With a rain/snow line that waivered from 4000 to 5000 ft throughout yesterday and the night, expect the windslabs to become larger and more reactive the higher you get on the ridges where the snow was of lower density. They will continue to form on leeward terrain today as we recieve more snow accompanied by winds that are forecasted to gust up to 50 mph.  Shooting cracks in the snow is a sign of instability as you are skinning over windloaded terrain.

Warm temperatures and a high rain line will increase the risk for wet slides below treeline.  Expect to see evidence of loose wet slides and pinwheels.  Keep track of your elevation and where you are seeing rollerballs and expect the wet slide risk to increase and travel upwards in elevation as we hit the sunny days tomorrow and Sunday.

March usually likes to be complicated weather wise and this weekend will be no exception.  Yesterday we travelled to Latour Baldy and Frost Peaks area and enjoyed generally stable conditions. The windslabs from the last several storms have stabilized, and new slabs were just starting to form at the end of the day.  As we were leaving for the day, the snow had picked up and the winds with it.  We started seeing rollerballs around 5200' and were solidly in the rain line by 4500'.  And then a sleeper of a storm hit overnight.  Yesterdays snowpack is is now being burdened by new, dense snow and windslab development.  It came in warm and cooled down overnight, so the storm was right side up and should generally bond well.  But...the high elevation northerly aspects, we had a lighter density layer sitting on the surface which is now buried as a potential weak layer. On the southerly aspects, we had a sun crust which is now a possible slick sliding surface. The big take away is changing conditions with elevation and aspect; keep your head on a swivel as you are travelling in the backcountry this weekend and expect changes as the weather changes as well.  It's also worth a mention that the persistent weak layer is buried more than a meter deep in lots of locations. It is important to remember that it is still there when making terrain choices. It is low probablility that it gets triggered, but very high consequence.

Weather and CURRENT CONDITIONS
Weather observations from the Region
Two-Day Mountain Weather Forecast Produced in partnership with the Spokane NWS
For 2000 ft. to 4000 ft.
For 4000 ft. to 6000 ft.
Disclaimer