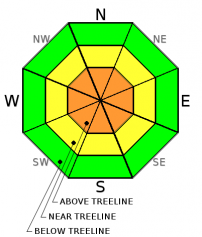 Avoid steep terrain above 6,000' on north and east aspects. It will still be possible to trigger the recent storm snow in these locations and triggering small windslabs will be likely on high, steep terrain. These winds slabs and storm slabs will decrease in sensitivity during the week as temperatures return to seasonal normals and the winds subside.

Avoid steep terrain above 6,000' on north and east aspects. It will still be possible to trigger the recent storm snow in these locations and triggering small windslabs will be likely on high, steep terrain. These winds slabs and storm slabs will decrease in sensitivity during the week as temperatures return to seasonal normals and the winds subside.

Strong southwest winds have likely created small but sensitive windslabs on leeward slopes above 6,000'. Use caution near ridgelines on north and east facing terrain above this elevation. Steep chutes and convex roll-overs will be likely places to find trouble in the highest terrain.

Last weekends storm brought massive amounts of moisture to the high peaks of the Kootenai. At "treeline" elevations it fell as a mix of rain and snow and has begun to stabilize as temperatures lower. Above 6,000' the moisture came in as all snow and is trending towards improved stability; but, it is still likely you will trigger a slide in the top 3-4 feet of the snowpack in steep terrain at upper elevations.

The base of our snowpack is housing some structural weakness consisting of early season ice layers sandwiched by weak sugary snow. These layers are now very deep and will likely be resistant to human triggering. These weak layers will become active as we add stressors such as last weekends warm temps and heavy amounts of moisture. Many avalanches ran on these deep weak layers last weekend as the snowpack took on the stress of added water weight and was weakened by above freezing temperatures.

Last weekends storm delivered impressive amounts of moisture between Thursday evening and Sunday. Hawkins Lake Snotel recieved 5.3" of snow water equivalent (SWE) and Bear Mountain picked up 6.9" of SWE during this period. The snow line fluctuated up and down the hill during this period leaving us with an interesting scenario where tons of high elevation snow sits on the peaks but very little snow remains down low; thus, making the access for getting there less than awesome. During the storm lots of steep terrain avalanched at the elevation band where the temps were hovering just above the freezing mark. We observed many crowns yesterday that appeared to release on the deep weak layers (crust/facet combos), all the observed crowns were at 6,500' and below. At elevations above 6,500' we observed no recent avalanche activity but there is a thick, dense blanket of snow on north and east aspects due to the strong southwest winds that came in with the storm. The new snow is bonding relatively quickly as the temperatures return to seasonal norms.

During our tour we were also greeted with steady 15mph winds and strong gusts out of the southwest once on the ridgeline. These winds were continuing to build the windslab problem at the upper elevations and I was able to trigger small windslabs on test slopes with an easy ski-cut.

At lower elevations (below 5,000') there is very little snow left. Good news-low avalanche danger. Bad news-lots of brush to thrash through if you want to get to the snow up high.