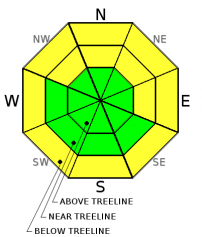 Buried surface hoar persists in the snowpack but has become less reactive. Use caution in steep protected openings and draws below 6,500'.

Expect avalanche hazard to rise to CONSIDERABLE by Saturday if the predicted storm brings more snow and wind into the area. The new snow will fall on a fresh layer of surface hoar below treeline and crust layers above treeline creating reactive conditions this weekend.

Buried surface hoar persists in the snowpack but has become less reactive. Use caution in steep protected openings and draws below 6,500'.

Expect avalanche hazard to rise to CONSIDERABLE by Saturday if the predicted storm brings more snow and wind into the area. The new snow will fall on a fresh layer of surface hoar below treeline and crust layers above treeline creating reactive conditions this weekend.

There are currently two surface hoar layers within the snowpack. The older and larger layer of crystals that developed mid January is becoming less reactive in stability tests and showing a low likelihood of failure and propagation. A small layer is being found underneath last Wednesdays(1/23) storm snow in isolated drainage bottoms below 6,000' that was reactive and producing shooting cracks and collapsing on Monday. It seems to be very much contained to protected pockets and will likely produce soft slab avalanches 10" thick. Use caution near creek/drainage bottoms in the mountains at elevation between 4,000-6,000' where these sensitive pockets may exist. Pay attention for signs of instability such as the shooting cracks you see under my skis below and listen for audible collapsing sounds in timbered openings. 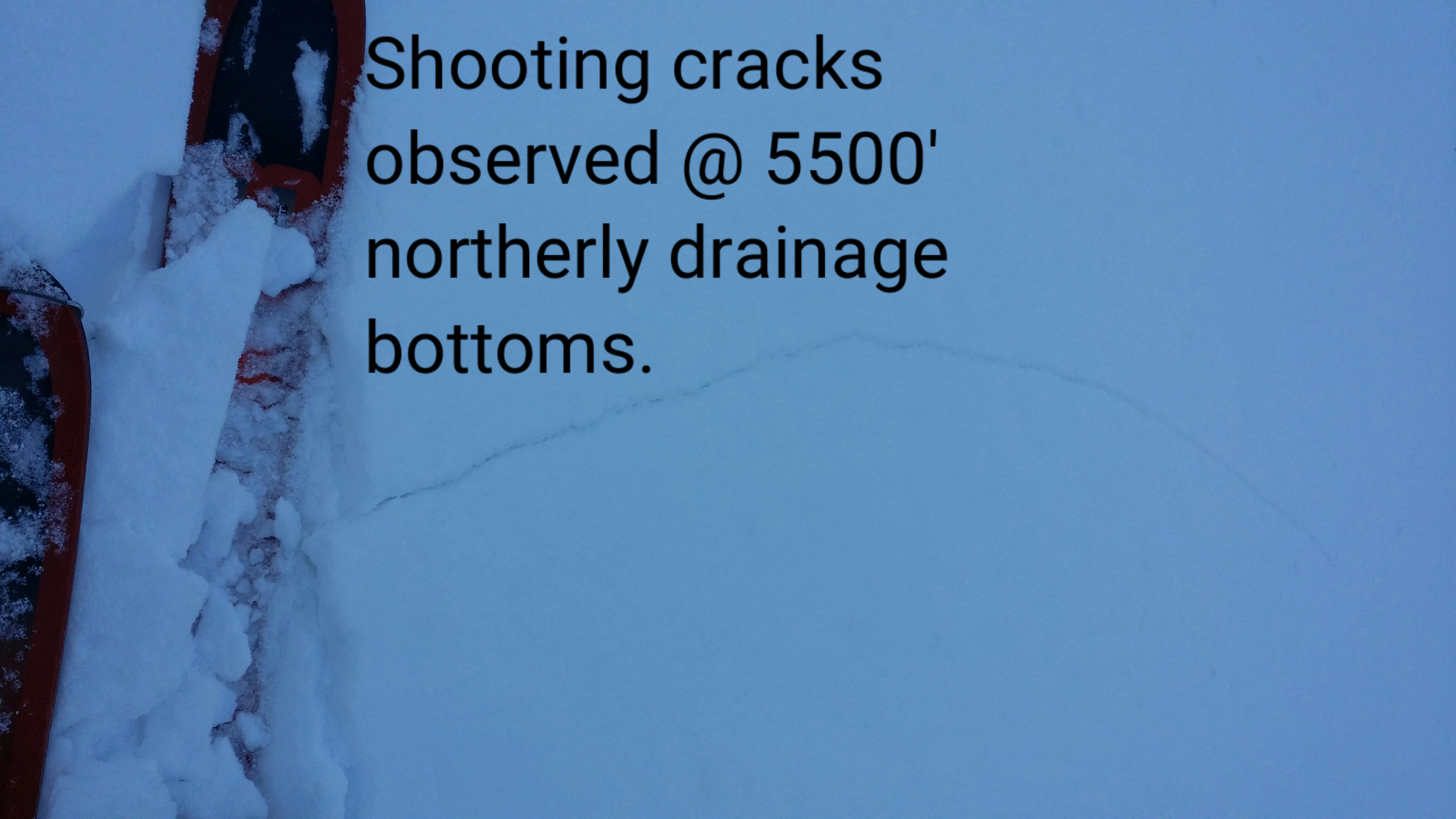 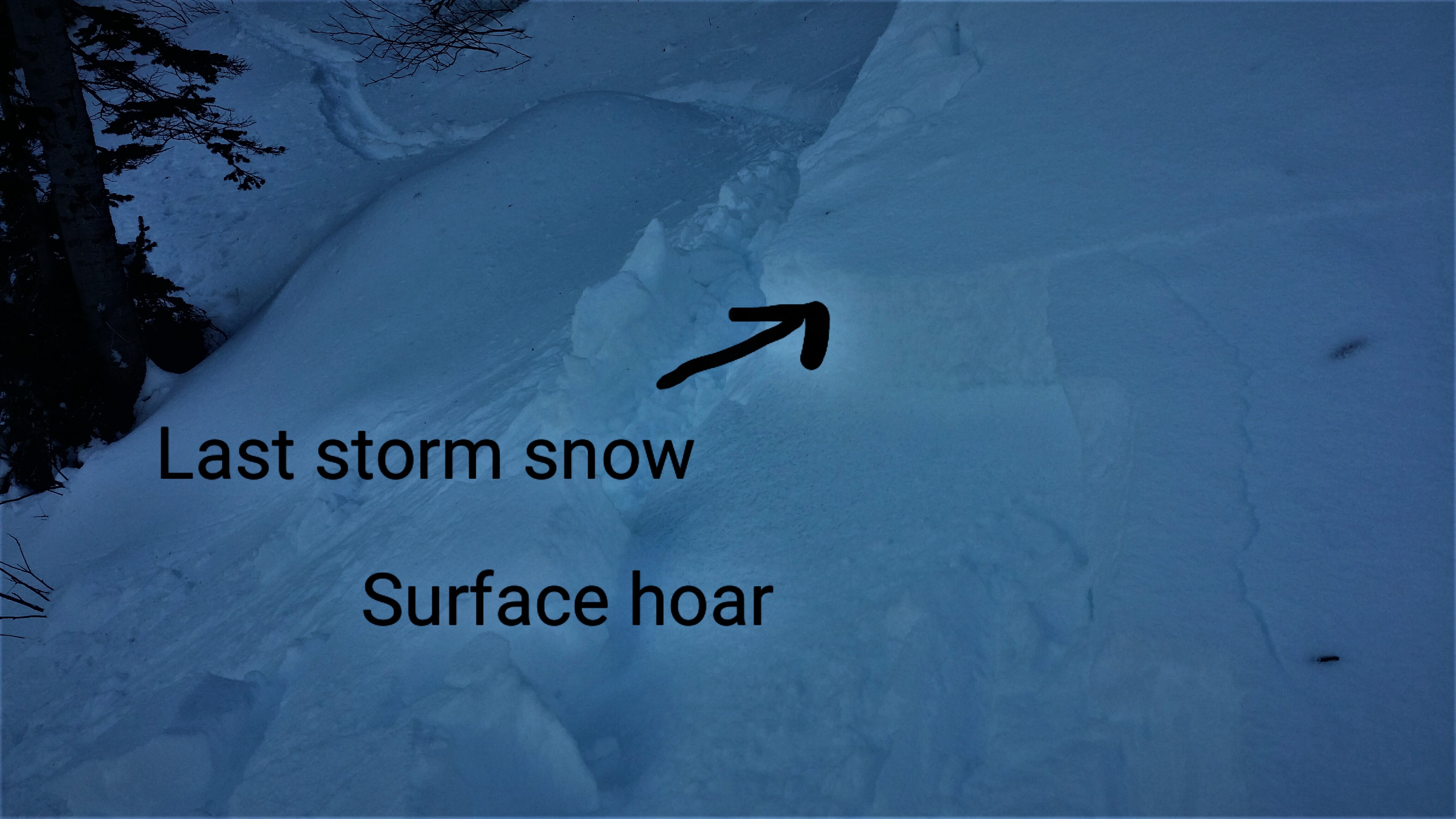 The forecasted weather is predicting the temperatures to rise today and into Saturday with the incoming storm. Snotel sites across the Kootenai are already recording pretty mild temperatures as of Friday morning. This will create the potential for loose-wet slides at lower elevations below 5,000'.

On January 31st we ventured into China Basin and the Pulpit Mt. area. Stability tests proved that the surface hoar is still out there and easy to find. It produced failures with moderate to hard force but did not propagate in any of the stability tests. At this point it will be very difficult to trigger this weak layer but still possible in areas that I mentioned above in the "Persistent Slab Problem". My main concern going into the weekend will be the potential for Storm Slabs and Wind Slabs as another predicted storm rolls in. This forecast expires on Saturday morning; but, if the predicted weather plays out we can expect close to a foot of snow that will fall on yet another layer of weak surface hoar crystals below treeline. Above treeline the new snow will fall on a thin, reactive wind crust on northerly aspects and a sun crust on southerly aspects. Basically, the mountains have formed a poor surface for new snow to bond to at all elevations.

On January 28th we travelled into the East Cabinets with the goal of checking out the stability and reactivity of the buried surface hoar layer. Extended column tests at mid and lower elevations revealed that the surface hoar was buried under 15" of cohesive slab but was not showing to be highly reactive or propagating in these tests. As we dropped into the drainage bottom we were able to trigger small soft slabs on buried surface hoar in convex terrain at 5,500' in a north facing drainage.  This layer was also producing some large shooting cracks and audible collapsing. We covered alot of fairly steep terrain Monday from 3,500' up to 7,600' on multiple aspects and these protected draws were the only location where we found signs of instability.  The other interesting observations were the obvious evidence of warm mountain temperatures and strong northerly winds. With warm air and sun present on this past Friday and Saturday there wasn't much loose snow available for transport. When the strong northerly winds came out of the north on Sunday it produced a thin, stiff skin on open and exposed terrain at upper elevation. This skin broke loose easily with weak snow below it and we observed multiple locations where it realeased on its own accord in steep terrain. It's a pretty harmless slab; but, there may be thicker pockets in extreme terrain and I mention it for that reason. It will also make a poor surface for bonding when the next storm rolls in. On southerly terrain the snow surface is also pretty stiff right now due to the warm sunny days and cold nights. The stability however on these solar aspects is pretty good, we observed some older rollers but nothing was moving Monday or Thursday.  Link to short video of Mondays obs! https://youtu.be/-TSFVQyCSn4