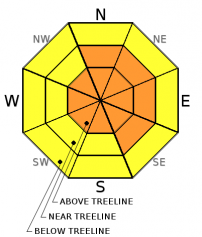 Significant snow accumulations today with 9-13 inches expected on top of the 7 plus inches reported.  Temperatures and snow densities are low.  Expect hazard to increase with developing storm throughout the day and assess winds, temperature and precipitation "rapid" changes!

Significant snow accumulations today with 9-13 inches expected on top of the 7 plus inches reported.  Temperatures and snow densities are low.  Expect hazard to increase with developing storm throughout the day and assess winds, temperature and precipitation "rapid" changes!

New storm snow on top of a foot of light snow in the mountains with up to another foot today will create significant accumulations that are lighter than we typically get.  Watch for wind loaded areas and movement in the pack on windpacked surfaces and those areas where storm snow interfaces are.  Expect alot of loose sluffing and watch for isolated areas where wind slabs occur on the surface and existing slabs a few feet down.

Winds slabs are expected to form with the winds being 23-33 out of the SW, gusts up to 47.  Exposed ridgetops and open terrain will see the most wind effect.  It is strongly encouraged to stay off of steep open wind loaded terrain.  Instability is expected to increase throughout the day with predicted weather.  Yesterday in the Caribou area of the Selkirks I found mostly soft storm slab at 6500 feet where it was sheltered but found isolated areas midslope that were a bit touchy and was able to kick off some isolated windslab areas.  There is a significant bed surface on the upper pack that poses a problem where the terrain is steep enough.

Two feet below the surface yesterday lurks an ice crust from a few weeks ago when the weather was warm.  It is about an inch plus thick and is deteriorating into facets.  I got an ECTP30 on that layer.  It took a bit to go, but it went and with the increasing snow load, it is light but watch for temperature changes and accumulation.  If it gets enough weight, a recreationist may be just the right trigger and this layer has potential to go big if triggered.

DISCUSSION...By NOAA Spokane...
Today through Wednesday...An elongated/stretched out low pressure
system sitting off the Washington coast will slowly move inland
today and finally eject out of the region on Wednesday. This will
keep the unsettled weather in the forecast today with drying from
the northwest Wednesday afternoon. Westerly flow across the
Cascades will shadow out the lower east slopes of the Cascades and
the western Basin somewhat this afternoon and overnight. As the
low begins to move inland today the surface gradient will shift
from northeast to southwest. That is underway already this
morning. As the flow turns southwest today warm advection will
allow temperatures to increase with high temperatures warming into
the low to mid 30s across the southeast zones and mostly in the
20s across the remaining area. The shift will also allow the
convergence zone that has been draped across the central portion of
the state to slowly migrate north through the day and therefore
pushing the focus of the precipitation north of about Highway 2
this morning. By mid morning the surface gradient will increase
out of the southwest, combined with a low level jet between 35-50
mph we expect an increase in winds for the eastern Basin, The
Palouse, The Blue mountains, and north into the Spokane-Coeur
d`Alene region. Sustained winds of 15 to 25 mph with gusts 30 to
35 mph will once again cause areas of blowing and drifting snow.
Snow density will like have a mitigating effect on the blowing
snow, however, travelers along and east of Highway 395 from the
tri-Cities to Ritzville and south and east of I-90 from Ritzville
to Spokane should be prepared for rapidly changing conditions.

*Snow/precipitation Type: For today the heaviest snow
accumulations will be across the Cascade crest with the potential
for 4-7 inches of snow and up to 10 inches near the crest, and
also for the northeast Washington mountains and Panhandle
mountains which could see 3-6 inches in the valleys and 7-14
inches in the mountains and locally more. For the remainder of
the forecast area we are looking at 1-3 new inches of snow. For
the Waterville Plateau and deep basin an inch or less. For
portions of the Palouse and L-C valley it looks like the snow
will change to rain or a rain/snow mix through the afternoon.

*Wind/Drifting snow: As mentioned above winds are expected to
increase to 15 to 25 mph with localized gust 30 to 35mph. As the
winds increase temperatures will also be on the increase. With
temperatures warming into the low to mid 30s blowing and drifting
snow should be mitigated somewhat. But there will still be
localized areas that could see impacts.

Tonight and Wednesday...The cold front will drop southwest through
the forecast area tonight and Wednesday and will stall out along
the Oregon/Washington border Wednesday afternoon. Expect a period
of moderate to heavy snow with the frontal passage. With the front
stalling out we expect an extended period of moderate snow south
and east of a line from about the Tri-Cities to about Kellogg
where 1-3 inches at the lower elevations and 4-6 inches in the
mountains. We will monitor this area for the potential for more
winter advisories and warnings. Tobin

The past few days I have covered Schweitzer backcountry and the Selkirks north into the Pack River drainage.  I have seen extremely wind hammered ares on NE aspects near Schweitzer and less effected areas to the North.  I was surprised to find soft conditions yesterday to the North, however I did find wind affected areas midslope where I skied.  Note that it is highly variable and I had to assess conditions from where I dug on top and conditions were stable, reassess midslope where I felt some windslab under my skis.  The pit data was different depending on where the winds hit this past week.  Reassess often.  Remember OODA....Orient, Observe, Decide, Act frequently throughout your travels and you will be more aware of your surroundings and less likely to be caught off guard.  Travel safe and note today is a big change day and a day to play it safe and be more conservative than perhaps you have been up to this point in the season.