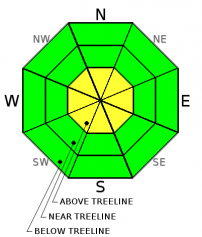 Another warm and wet storm has brought high mountain snow above treeline and rain below. Expect to encounter storm slabs above treeline on all aspects and crusty snow conditions below 6,000'. In the Purcell Range continue to keep an eye on the persistent weaknesses at treeline and above. Stability will improve as temperatures drop and the wet snow locks together at lower elevations.

Another warm and wet storm has brought high mountain snow above treeline and rain below. Expect to encounter storm slabs above treeline on all aspects and crusty snow conditions below 6,000'. In the Purcell Range continue to keep an eye on the persistent weaknesses at treeline and above. Stability will improve as temperatures drop and the wet snow locks together at lower elevations.

The Kootenai has received multiple doses of heavy storm snow throughout the week. Above 6,000' this new snow will need some time and cooler temperatures to strengthen and bond to the variety of surfaces it has landed on. Below this elevation the rain-soaked snow will lock together as temperatures drop back below the freezing mark.

As the temperatures fall and time passes the "persistent slab" problem that I am seeing primarily in the Purcell Range will continue to heal. I continue to mention it due to the fact that these weaknesses will "come alive" so to speak as we undergo weather events like Thursdays'. These high elevation rains and heavy storm loads add weight and decrease strength within the snowpack. The weaknesses we are seeing in the Purcells consist of a layer of buried surface hoar, thin facet layer and weak sugary snow at the base. There was a fatality near Choteau last week on such weak layers. Click the link to see the preliminary report.

Yesterday we visited the Eastern Cabinets to check out the weeks storm snow and flounder in the rain. The theme for the day was "the climb up in the rain-soaked snow is really hard; but, at least the skiing will be terrible on the way down." Starting at 4,000 we had temps around 37° and climbed to 5,500' before we transitioned into wet, heavy snow. The snow remained this way up to about 6,200 before it started to cool below the freezing mark.  We dug a pit at 6,300' on a SE aspect in a location that was slightly loaded. At this spot we recorded 124" of total snow-depth. Stability tests revealed fairly stable conditions with a failure 4" below the surface on a density change and 8" down on a crust layer that likely developed during the storm on Wednesday. Nothing really jumped out in stability tests, the real story to take home regarding stability is weather. Lots of new snow fell this week in the Cabinet range, below the 6,000-6,5000' mark it fell with a lot of rain and saturated the snow, as temperatures drop it will lock together and become pretty stable (i.e.-crusty!). Above this mark the snow fell on a variety of surfaces, due to the warm and wet nature of the storm it should bond relatively well. There are always spots though such as firm wind scoured surfaces and lower density snow layers that may provide slicker surfaces to slide on and these will take more time to bond to. The best riding will be found this weekend up high; but, it is also where you may trigger a slide in the new storm snow. Continue to practice safe travel habits and carry the right gear (Shovel, Beacon and Probe!) Click the youtube link below to watch a video of yesterdays conditions.