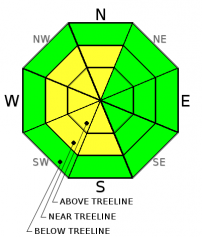 We are currently enjoying good general snowpack stability with windslab problems on specific terrain features. Strong east winds have loaded west aspects just below ridgelines and cross-loaded chutes on north and south aspects. For the best and safest riding conditions look for soft snow in timbered areas where the surface snow hasn't been hammered by the wind!

We are currently enjoying good general snowpack stability with windslab problems on specific terrain features. Strong east winds have loaded west aspects just below ridgelines and cross-loaded chutes on north and south aspects. For the best and safest riding conditions look for soft snow in timbered areas where the surface snow hasn't been hammered by the wind!

This past weekend the winds cranked once again out of the north and easterly directions. This wind has left the surface snow of these aspects firm and scoured in open areas exposed to the wind. Small and stubborn pockets of wind slab can be found on west aspects near ridgelines and in cross-loaded chutes on south and north faces in open terrain. These slabs will likely be stiff and difficult to trigger, the photos below exemplify the terrain where you may find trouble if you are looking for it. 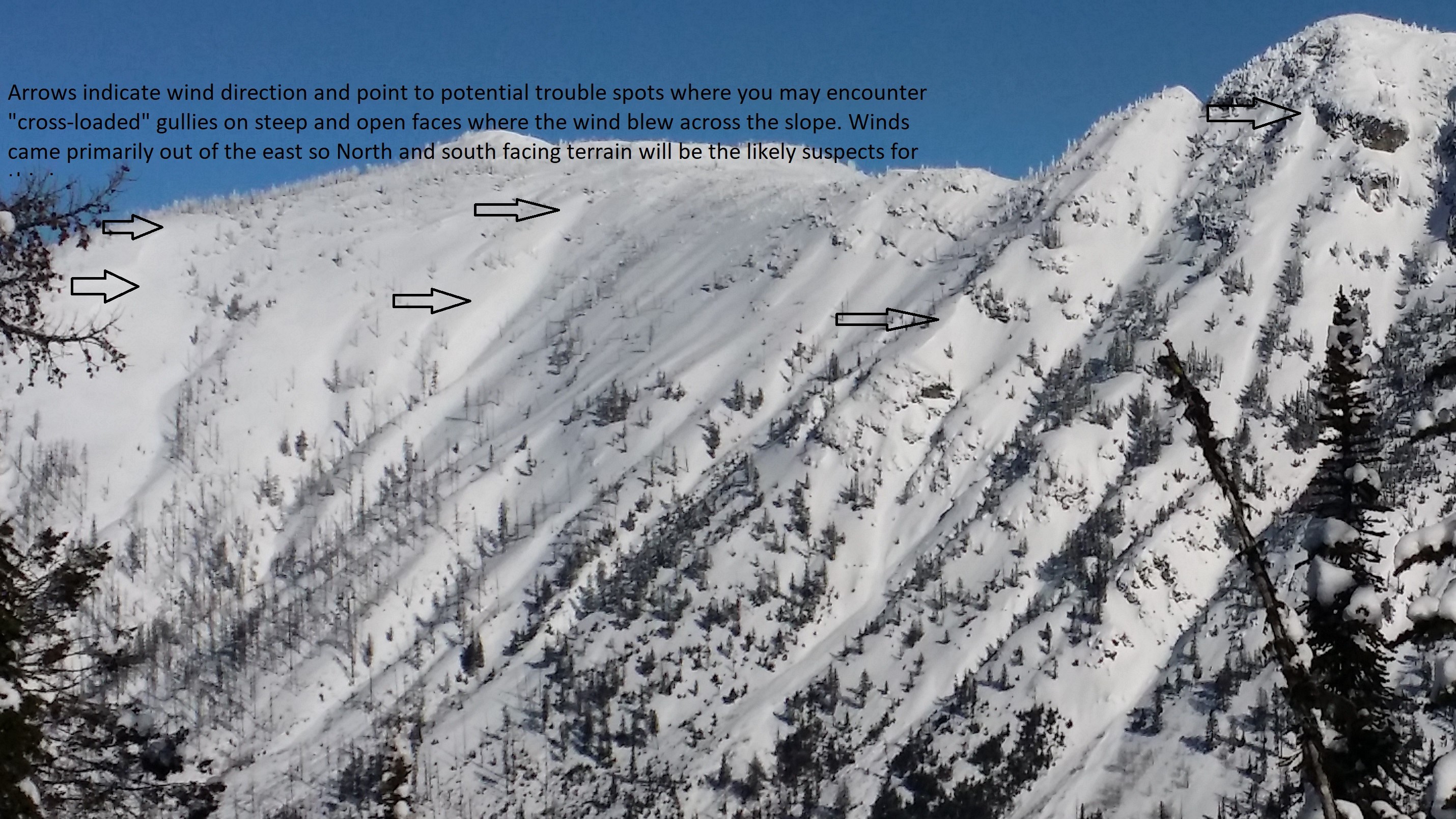 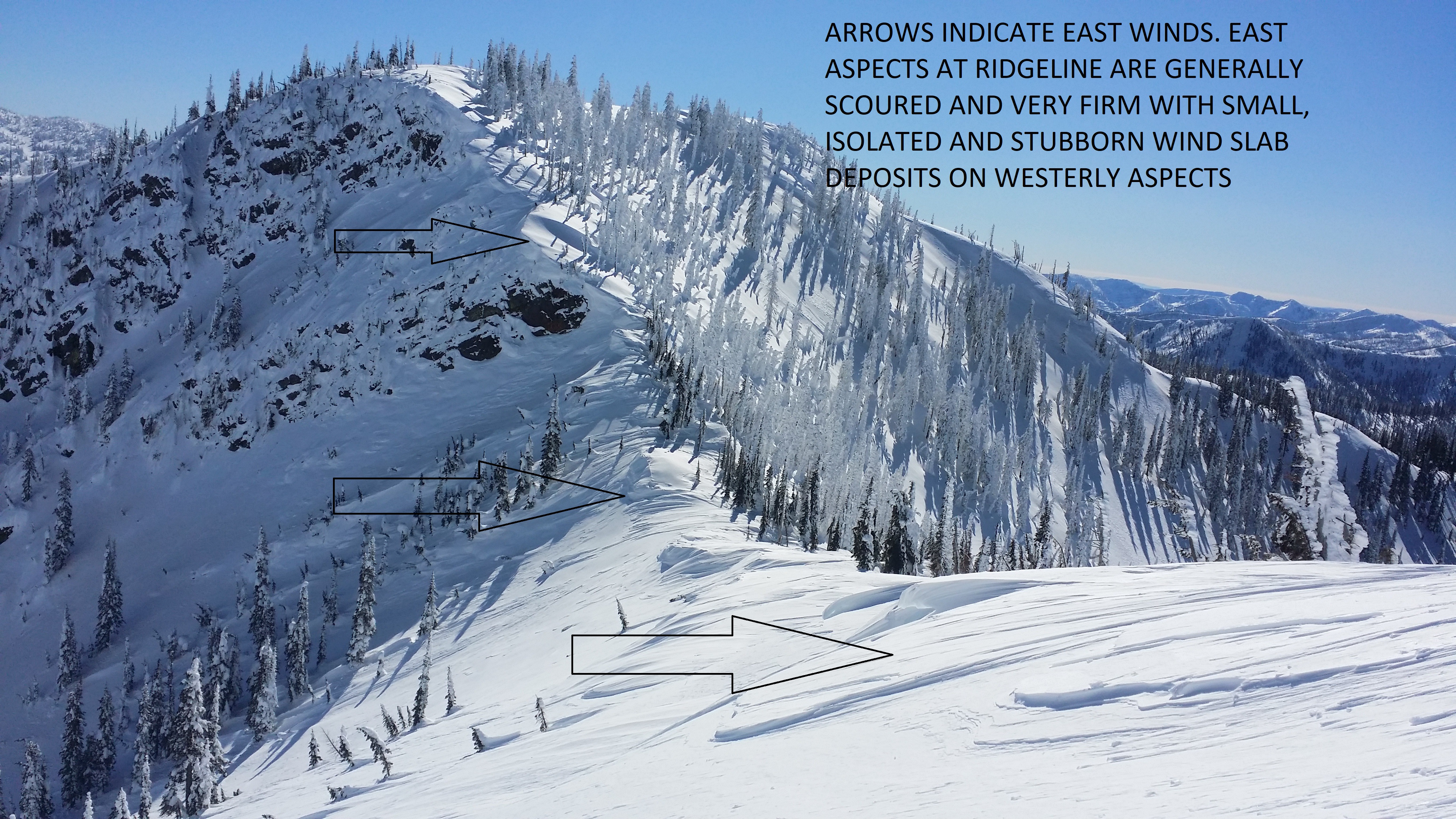 Steep terrain with cross-loaded chutes in the West Cabinets.

This past weekend the cold continued and brought with it yet another brutal cold front. The east winds that came with it were quite evident yesterday near open ridgeline terrain in the West Cabinets where the snow had been blasted off of the east faces and deposited into very firm pillows on the west side. As can be seen in the above photos! We covered alot of ground yesterday poking around at windslabs on every aspect and found them to be pretty isolated to the previously mentioned locations, they are also pretty stiff and difficult to trigger. These slabs are like the mule you don't want to ride. You can get on him, and he will likely just stand there. But, if you jump up and down or kick him in the ribs he might just buck you off! It's best to just stay off that stubborn mule because there is some great soft snow still hanging out in protected pockets of timber. It's worth noting that with the cold-front the winds loaded up the opposite side of the ridges that we typically see. Generally our winds come out of the west and southwest and load up the north-east side of the ridges. The photo below displays this atypical scenario where old cornice hangs over the northeast aspect but the surface below it is actually scoured and firm. 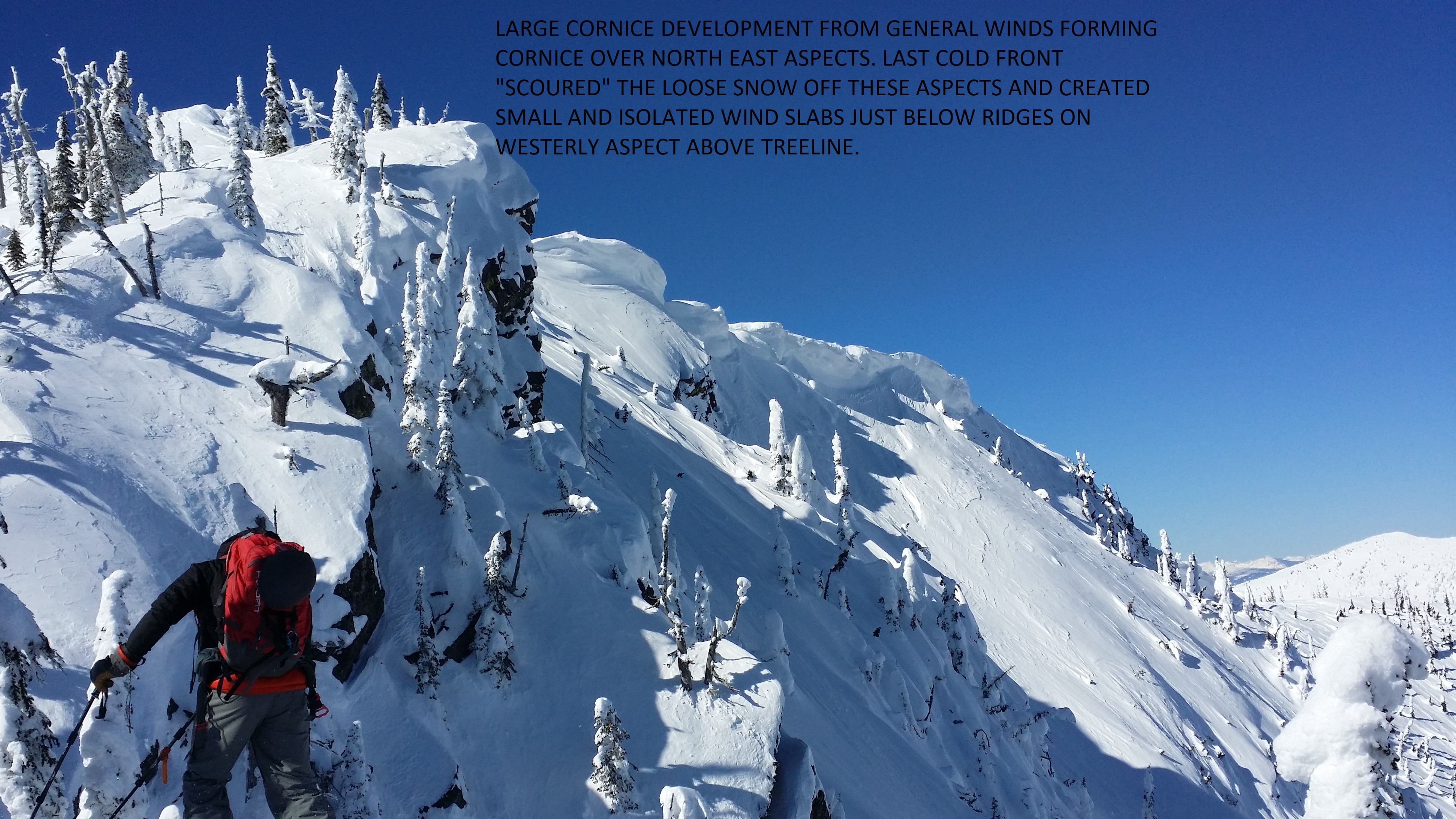 While I am using livestock analogies let's talk about the dead horse I have been beating called "Persistent Slab". Right now, the snowpack is showing good general stability. I have been talking about the weaknesses buried in the snowpack for awhile, it's been a couple of weeks since any of these weak layers have really showed potential to react or propagate in stability tests so until a weather change brings them to life I will quit beating the dead horse. In the end, the best way to deal with all the potential problems in the snowpack is to adopt and practice good habits. Travel one at a time across steep terrain, watch your partners from a safe location when high-marking or skiing steep terrain and always ride with a beacon, shovel and probe. There will always be a hazard out there in the mountains so be prepared and mitigate it with good habits and good decisions. Thanks for reading and stay warm!