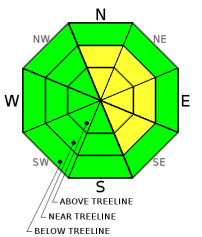 With a modest dose of fresh snow and strong south west winds we will continue to list WINDSLAB as the main concern. Expect to find dense slabs of snow near ridgelines and steep rolls. Watch for shooting cracks in the surface of the snowpack and be very wary of steep, unsupported terrain on north and easterly aspects when dropping off of ridglelines this weekend.

With a modest dose of fresh snow and strong south west winds we will continue to list WINDSLAB as the main concern. Expect to find dense slabs of snow near ridgelines and steep rolls. Watch for shooting cracks in the surface of the snowpack and be very wary of steep, unsupported terrain on north and easterly aspects when dropping off of ridglelines this weekend.

Fresh snow and stout winds out of the southwest yesterday created dense slabs of reactive snow just below ridgeline and steep rolls on north and easterly aspects. These slabs were mostly isolated to these locations and consequently small in size. It is very possible you will trigger something bigger if high-marking or dropping into steep and open terrain on these aspects. Use caution and watch for shooting cracks, and changes in surface density to alert you to these slabs. Yesterday they were making themselves obvious as can be seen in the photos below. 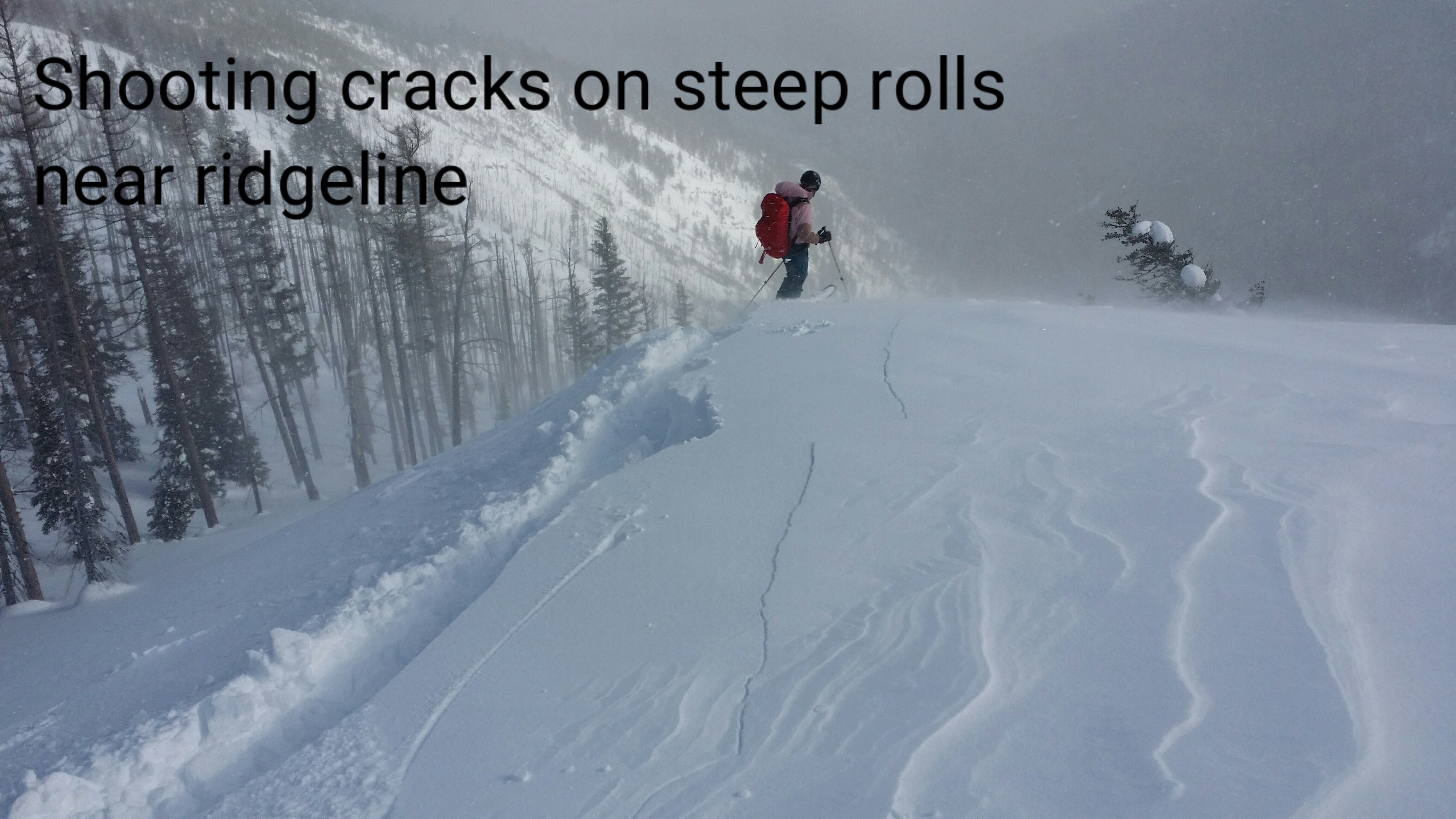 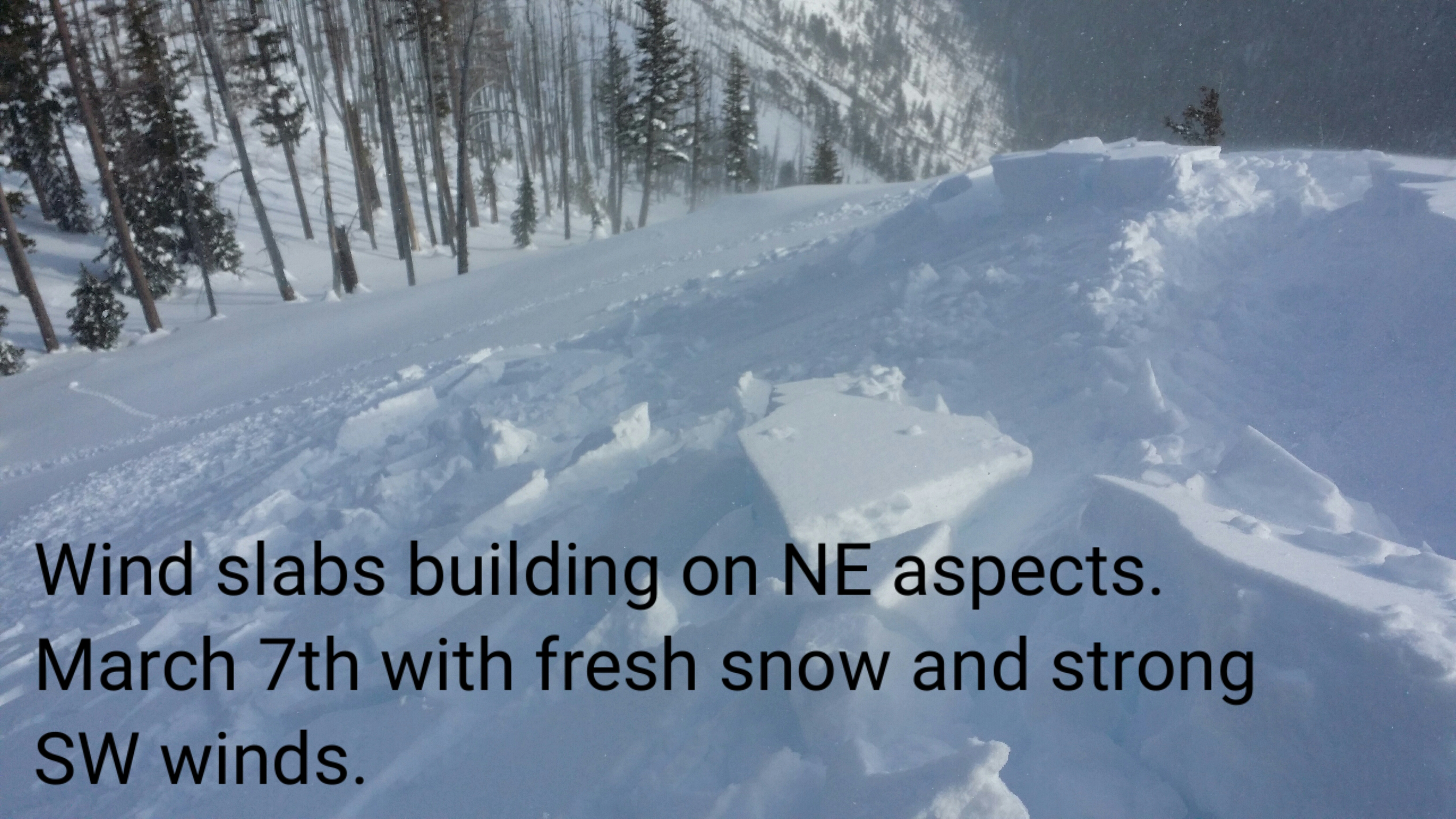 So, lets start with the good news.

The riding and skiing conditions are fantastic and generally the snowpack is quite stable across the area. Snowpack tests have produced pretty consistent results and shown the weak layers within the snowpack are unlikely to propagate into a slab avalanche. Yesterday we found one anomaly at 6,400' on a NE aspect that propagated with hard force, it did not propagate in the second test or in adjacent pit. This is really a good reminder of the fact that snow varies widely across aspects and elevations and you will not always see everything that is going on below the surface. SO, again the best way to deal with these unknowns is to be prepared and practice smart travel habits.

Fresh snow and strong winds! On the trip up yesterday in the East Cabinets we had moderate winds out of the North which switched mid-day to strong out ot the South and West. The loose, fresh snow was rapidly transported and forming fairly reactive slabs near ridgeline. Additional observations from the West Cabinets reported similiar conditions in Keeler Creek. The 6" of new snow was poorly bonded to the older snow but it was not slabby or likely to be a concern unless you are in an area where the wind worked its evil magic. In steep terrain you may get some light surface sloughing out of this new snow. as well.  Lastly, hard to believe but it is now March. When the sun comes out (which it may this weekend) it will have some energy that we haven't seen in a while. Expect the new snow to form small wet slides on southerly aspects in steep terrain. Likely to be pretty harmless except in areas where they can entrain you and push you into trees or cliffs.