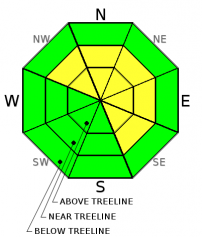 Human triggered avalanches are possible in steep terrain on north and east aspects that have been loaded in by southwest winds. Be on the lookout for snow that has drifted into pockets in steep chutes, steep convex rolls and below ridgelines. These will be your likely spots to find trouble in the next couple of days.

Human triggered avalanches are possible in steep terrain on north and east aspects that have been loaded in by southwest winds. Be on the lookout for snow that has drifted into pockets in steep chutes, steep convex rolls and below ridgelines. These will be your likely spots to find trouble in the next couple of days.

With a fresh shot of loose, light snow last weekend and strong southwest winds we now have pockets of windslab in the usual locations on leeward terrain. On Monday we observed that south and west aspects that were open and exposed to the wind have been stripped down to the crust layer. On the north and east sides there was plenty of snow loaded onto slopes below cornices and in terrain deppressions such as chutes and gullies.  These wind slabs have had some time to settle and were not highly reactive yesterday. In steep and unsupported terrain I would still avoid them, particularly in areas where a small slide may result in big consequences.

The snowpack held up well yesterday in stability tests and showed very little evidence of weakness as we travelled up the hill on all aspects. My primary concerns right now are the stout rain crust from February 1st, the snow is actually sticking to it well in most locations. We have observed a couple of weak interfaces above this crust in the past week that have not been reacting much or just difficult to locate. If you are committing to steep terrain take the time to dig a quick pit down to this crust layer and see if you are getting any propagation in the snowpack above this crust layer. We have observed small surface hoar and graupel just above this crust, check to see if it's on your slope before high-marking or jumping in to ski steep terrain.

On February 10th I travelled into Benning Mountain with Master Brewer and Engineer Grant Golden for a look at the snow. The obvious clues that jumped out on the way up were a couple of natural slides on northeasterly terrain both south and north of Benning Mountain. Both slides were small surface avalanches that appeared to fail in last weekends storm snow just below ridgelines. As mentioned above the Southwest winds had stripped the southwest aspects down above treeline and the northeast aspects were loaded in with pillows of soft snow. We also observed one large glide crack on Benning that was hanging precariously above a steep roll just waiting for some more warm and rainy weather.

Diving in for a closer look at the snow, our pit results were fairly promising and showed no weak points that jumped out and scared us. There is about a foot of snow on the February 1st rain crust which is 2-3" thick in the West Cabinets. In the Purcells and East Cabinets you will likely find less snow hiding this crust layer right now. There were a couple of weak storm interfaces in the snow above this crust but none showed a likelihood of propagation. At elevations below 5,200' we were seeing a second, thinner rain crust in the snowpack that was shearing off with a fair bit of resistance. I have not seen this second crust layer in the other mountain ranges of the Kootenai but it is another layer to keep an eye on in the West Cabinets for now.