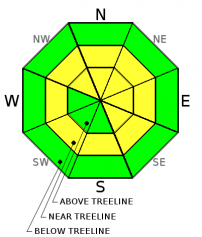 A series of storms will bring modest snow accumulations to the mountains through Monday. This new snow is forecasted to arrive with strong southwest winds. Expect to find thin and reactive slabs on north and east aspects that will build in thickness and hazard throught the weekend. These slabs will be most concerning at upper elevations where the new snow will rest on a very firm bed surface that has been packed and scoured by strong winds this past week.

A series of storms will bring modest snow accumulations to the mountains through Monday. This new snow is forecasted to arrive with strong southwest winds. Expect to find thin and reactive slabs on north and east aspects that will build in thickness and hazard throught the weekend. These slabs will be most concerning at upper elevations where the new snow will rest on a very firm bed surface that has been packed and scoured by strong winds this past week.

Strong southwest winds and light accumulations of snow will create thin and reactive slabs at treeline and above. New snowfall will land on a very firm and icy bed surface at upper elevations, expect the new snow to bond poorly to these surfaces. With each passing storm this weekend these slabs will build, expect the avalanche danger to rise by Sunday as the second significant storm passes through. This problem will be found on north and east aspects below ridgelines, depressions and steep chutes. Watch for obvious clues such as cracking and natural avalanches in steep terrain.

Snowfall amounts in the West Cabinets this AM were stacking up to about 7 inches at 4 A.M. The East Cabinets and Purcells were showing 3-4" with more expected to fall throughout the weekend. With this new snow falling on a firm bed surface at upper elevations it may take some time to stick, I would approach steep terrain with caution today, particularly in the West Cabinets where the storm snow is thick enough to be a problem. Looking at predicted weather I expect these thin slabs on Friday to increase in thickness and become more hazardous by Sunday.

This week has been mild and dry, felt like March to me. The lack of snow and mild temperatures has given the snowpack some time to gain strength and set up well, above the treeline it may be set up a little too well really! What I have been seeing in my travels early in the week was a thin layer of surface hoar growing on the surface in many locations, yesterday the wind was blowing so hard that it leveled this layer of crystals in most locations. I did not make it into the Purcell Range this week, if there is a place where the surface hoar survived and is now being buried, I am guessing that's the spot! The primary bed surface out there that should concern you right now is the firm crust and wind packed snow at treeline and above. The Cabinets were getting hammered by southwest winds this week. South and west aspects were stripped down to the February 1st rain crust and the loose snow was transported and packed into thick, dense slabs on the northeasterly side of the mountain. These slabs were hard, strong and unlikely to break free. The problem will be the new snow that will come in with more wind and gain in thickness each day this weekend. Snowfall totals on Friday may not be very impressive, but with the winds we will see slabs build and likely become a concerning matter on leeward terrain below the ridges and in steep convex terrain. The bad news is that the new snow will have a tough time sticking to some of the firm surfaces out there. The good news: the problem areas should be easy to spot and close to the surface. Watch for cracking snow, thick pillows below the ridgelines and signs of recent avalanches in the steep an open terrain. The safest and best riding conditions will be below treeline.

We have also observed numerous signs of old avalanches this past week, mostly old crowns and debris from the rain on snow event during February 1st. I took a day off to ski on Wednesday and was able to make my way up to an elevation of 7,700' and found that the rain crust was still there with no sign of letting up. Best guess is that it rained to at least 8,000' during the February 1st event. There were many small crowns and cracks out there from this warm event, the most impressive I have found yet can be seen below. It is hard to put a number on the depth of the crown; but, best guess is 8 feet deep. The debris flowed all the way to the drainage bottom and scraped the snow down to the ground over a convex roll as it descended. Top of crown is at an elevation of 7,000'. 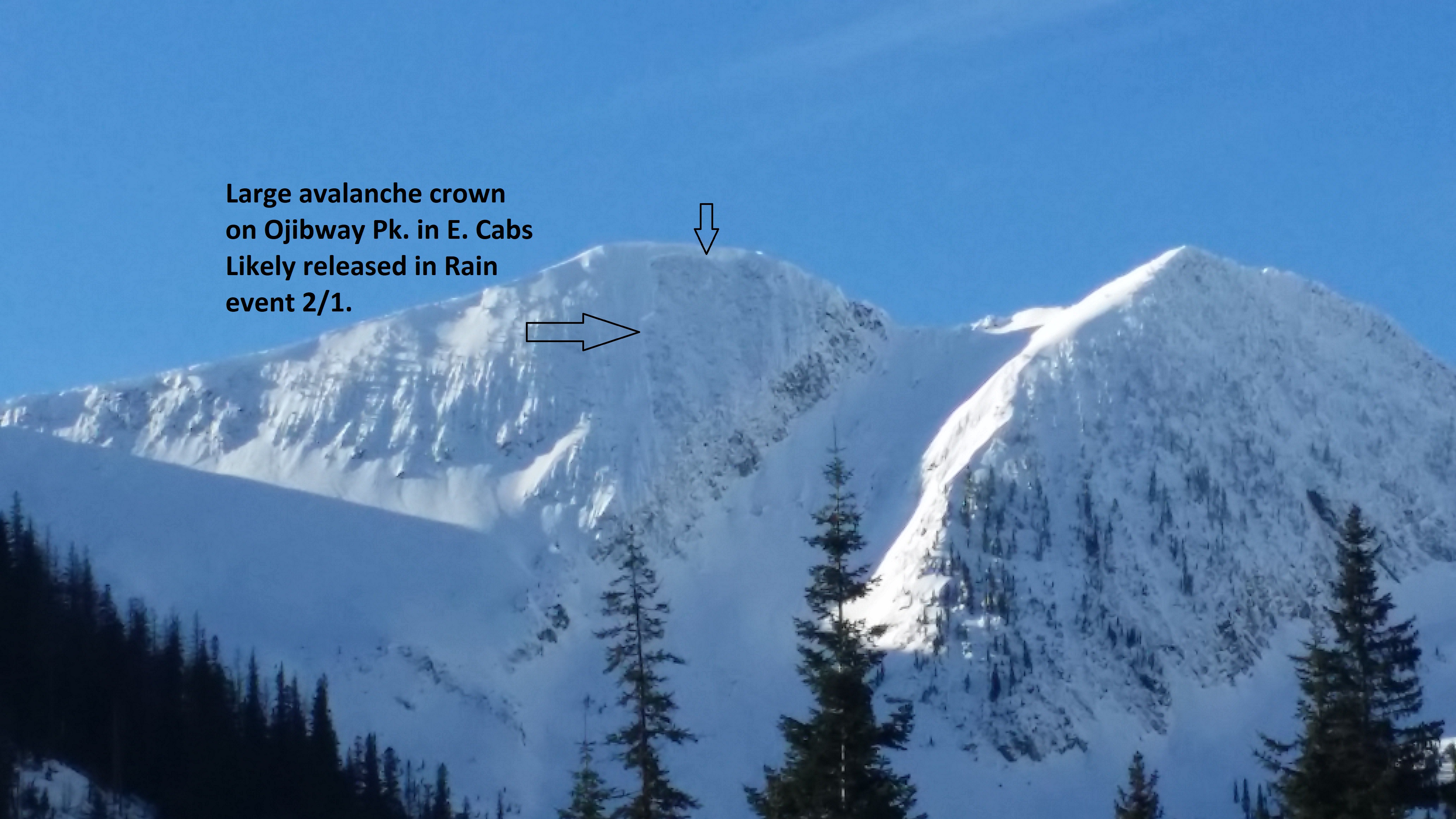