Heavy mountain snowfall and strong winds will create conditions for HIGH avalanche danger today! Expect these dangerous conditions to remain elevated through the middle of the week. Avoid riding on or below any slopes steeper than 30° during this time period.

Heavy mountain snowfall and strong winds will create conditions for HIGH avalanche danger today! Expect these dangerous conditions to remain elevated through the middle of the week. Avoid riding on or below any slopes steeper than 30° during this time period.

Heavy mountain snowfall will continue to fall through Wednesday on terrain above 4,000'. The new snow is resting on a variety of surfaces that will be prone to avalanching on all aspects. New snowfall is most intense in the West and East Cabinets with snotel sites in the Purcell Range showing significantly less snowfall at this time.

Strong winds out of the West and Southwest have created drifting and slabs on North and East facing terrain. Stiff pockets of drifted snow will be evident and crack easily near ridglines and exposed gullies. Yesterdays winds were cranking at a steady 20-25mph out of the West on ridgeline locations. Steep chutes and leeward terrain were obviously loaded in with fresh snow and packed into a nice, dense slab. Expect these slabs to be easily triggered.

There are two significant weak layers in the snowpack that we are monitoring that will become sensitive to triggers as the storm snow piles up and adds weight to the snowpack. In the East Cabinets and Purcell Range I have been finding buried surface hoar in sheltered timber locations below 7,000' and in the West Cabinets there is a very thin crust overlying tiny facets. Both are likely to be reactive with potential rising as additional snow and weight adds stress to these layers. 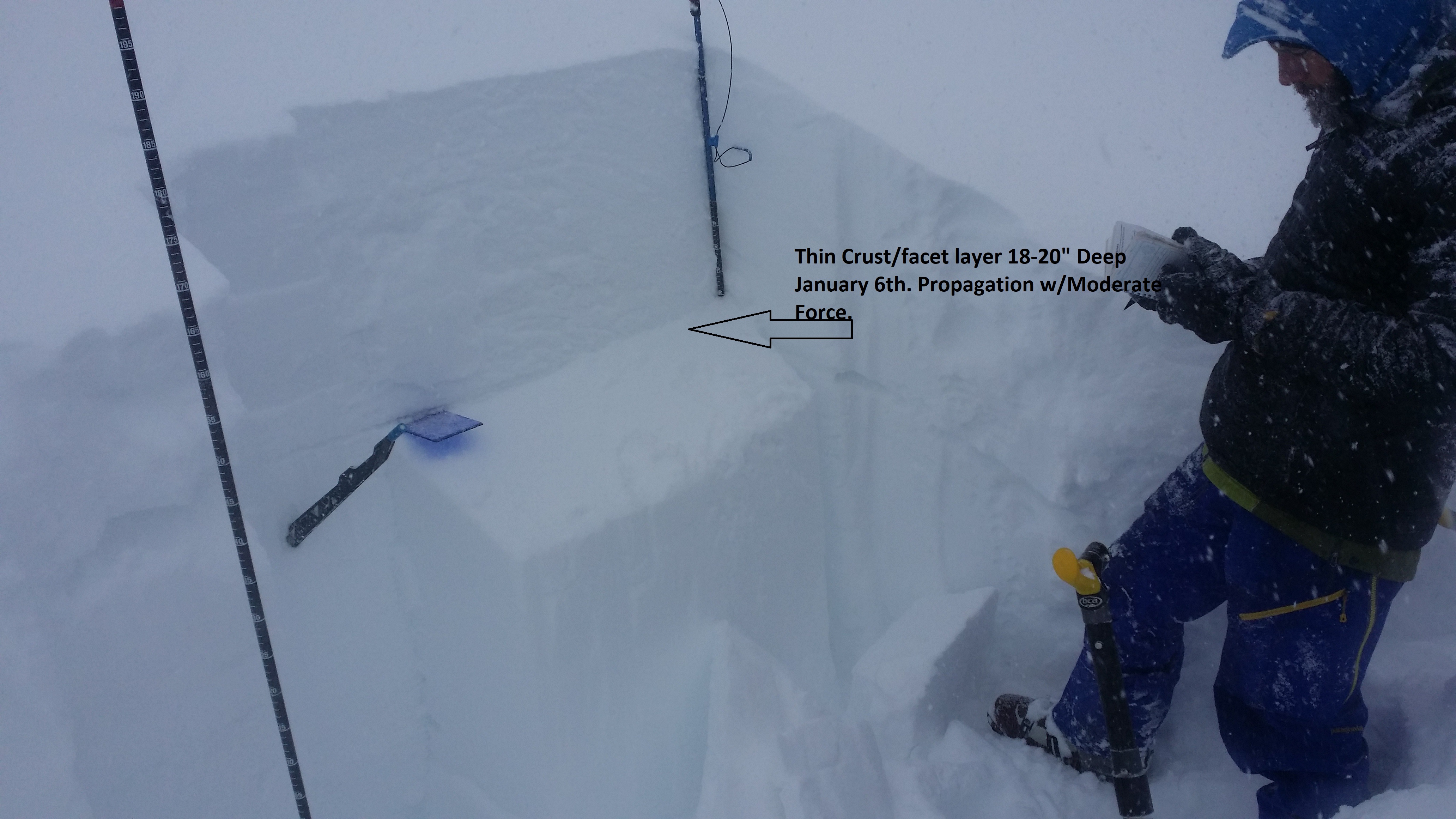 Photo depicting weak crust layer at 6,600' on Smith Mt. An additional foot of snow has been added to the snowpack since photo was taken.

These are the "no brainer days", you don't have to worry about the monster hiding under your bed or in your closet. He's standing right in front of you and possibly taunting you to come play. Conditions are going to be obviously dangerous out there today. Keep it mellow and stick low angle terrain until this new snow has had a few days to settle out.

So, here's what I saw yesterday in the West Cabinets. First of all it was dumping and blowing hard, hard to find the tracks we set on the way out. This storm is forecasted to continue dumping snow through Wednesday. The first pit we dug revealed a layer of graupel (rounded little snow balls) that likely fell on Sunday and was being buried with the new storm snow. This layer was very reactive in stability tests and under foot as we moved around. About 18-20" below the surface we were finding a very thin crust layer that was breaking and propagating with moderate force in multiple locations. The potential for this layer to avalanche will be a serious concern in the coming days. Potential for a smaller avalanche in the storm snow to "step-down" to this deeper weakness will be a likely scenario and a destructive one to say the least. By the time this storm clears out this weak layer will likely be 3-4 feet below the surface. At exposed ridgeline locations there was some pretty obvious wind loading on all leeward locations and in steep chutes. We were able to easily trigger the new snow in a steep chute by tossing a chunk of snow crusted tree onto it.

With a quick look at the weather forecast below it shows that our storm totals are going to be pretty impressive with a bit of a warming trend today. This may cause the upperlayer of snow to become more dense and slabby which will add to our problem in the near future.