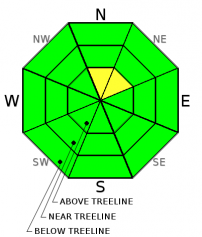 Consolidated snowpack conditions with extreme upper elevations on NNE aspects having some wind slabs.  Surface crusts are widespread due to sun affect this past week.  More snow coming with NE winds and cold temperatures.  Expect windslabs on thin crust this coming weekend.

Consolidated snowpack conditions with extreme upper elevations on NNE aspects having some wind slabs.  Surface crusts are widespread due to sun affect this past week.  More snow coming with NE winds and cold temperatures.  Expect windslabs on thin crust this coming weekend.

Currently windloaded aspects have slabs built up in upper ridgetop areas.  Once you get off the ridgetops the snow becomes soft and loose where it is protected on the NE aspects.  With the arctic front coming through the winds will be out of the NE and will slab up these aspects and add more snow with the winds.  Watch for more slabbing to continue with the storm that is expected to bring 2-4 and 5-9 tonight.

​On Snowy Top in the Selkirks yesterday, Kevin and I found a mix of surface snow conditions ranging from crust at lower elevations, powder in the trees, sun affected snow on the solar aspects, soft snow on the flats and North aspects, and wind affected surfaces on exposed upper elevation terrain.  You pretty much have to be on a hard North aspect to get some fresh snow conditions.  There were some small failures in the storm snow from last weekend and earlier this week and then about 1.5 feet down there is a 1 inch thick subtle ice crust with facets on top where we had a clean shear with moderate results.  This layer could wake up with any significant snow accumulation and could be triggered by new wind slabs forming on top and releasing, therefore causing enough disturbance to step down to this weaker faceted layer. 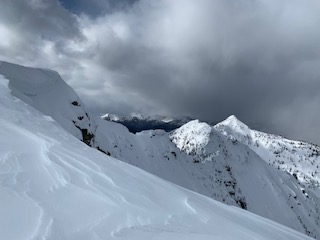