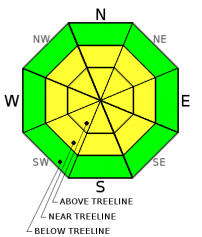 New snow from last weekends storm will be your main concern right now. In very steep terrain (over 35°) it will be possible to trigger avalanches in the upper 6-10" of the snowpack. On due north aspects these slides will come in the form of loose-dry slough or thin soft slabs. On solar aspects expect to trigger wet slides in steep terrain as the afternoon sun warms the surface.

New snow from last weekends storm will be your main concern right now. In very steep terrain (over 35°) it will be possible to trigger avalanches in the upper 6-10" of the snowpack. On due north aspects these slides will come in the form of loose-dry slough or thin soft slabs. On solar aspects expect to trigger wet slides in steep terrain as the afternoon sun warms the surface.

The most recent storm snow is resting on a firm surface on south and westerly aspects. With sunny days ahead expect to see small surface slides as it warms up in steep terrain. Yesterdays observations showed that most of these slides are staying pretty small and mainly found in very steep terrain close to rock outcroppings. As always, pay attention to the terrain below you as these relativiely benign slides can push you off a cliff or into the trees

The snow on the north side of the hill is staying surprisingly cold and light despite the warm days. Yesterday we observed evidence of multiple "loose-dry" avalanches and thin soft slabs that had released in steep terrain over 40°. These slides were all a result of last weekends storm snow and small in size. They are big enough to push a rider down the hill but not enough to bury you. Again, if you are in steep terrain, take a look at whats below you before committing to a slope.

What a week!  Instead of freaking out the next couple of days, maybe load up the machine and get into the mountains. The mountains are completely oblivious to the whole Corona Virus madness.

While you are up there here are a couple of things to keep in mind. The snowpack is pretty stable right now and the primary issues are close to the surface. The top 6-10" of snow are what you need to be thinking about right now and very steep terrain is where it is most likely to move on you. When the afternoon sun starts to cook the slope move to lower angle terrain, or head to the north side where the snow is light and soft (i.e.-FUN!!) As mentioned above, you may see some small slides in steep terrain or convex rolls on these shady aspects where the surface snow is still having a tough time sticking to the slope. The layers of buried surface hoar in the West Cabinets and Purcells are still there but unlikely to give you any trouble at this time so I have taken them off the "PROBLEMS" list.

Yesterdays observations were taken in the East Cabinets. The goal for the day was to cover ground and see how the new snow was reacting and take a look at the potential wind slab issues. The winds cranked last weekend and its' effects were obvious on the surface of the snowpack. Large ripples and pillows of snow could be viewed on open terrain particularly at upper elevations. WIth multiple warm days and cold nights under our belt I think it is unlikely you will have a problem with these wind slabs as they will be pretty stiff and stubborn in the days ahead. Aside from the fairly recent small slides in the surface snow, our other interesting observation was the development of another batch of surface hoar on northerly slopes and sheltered drainage bottoms at mid-elevations. This will be something to watch if it stays preserved and gets buried under the next storm. Time will tell.

I will provide a "Snowpack Summary" on Tuesday morning with no Hazard rating for those of you going out mid-week. The next (and last) advisory for the year will be posted on March 27th.